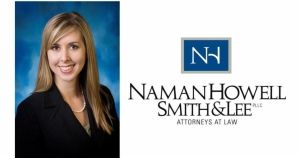 Last month, Naman Howell partner Stephanie Potter had the opportunity to travel to New Orleans to argue before the United States Court of Appeals for the Fifth Circuit. Obtaining oral argument in an immigration appeal is a major accomplishment -- last year, the Fifth Circuit heard argument in less than 5% of its immigration appeals. Stephanie reports that argument before Judges King, Smith, and Willett went very well, despite the high legal burdens borne by asylum applicants such as her client. Stephanie typically represents telephone and electric utilities and other businesses in Texas state and federal courts or administrative proceedings, so getting to argue immigration issues against the U.S. Department of Justice was an unforgettable experience. A ruling is expected later this year.

This was Stephanie's first asylum case. She was referred the client by American Gateways during the earliest phase of the client's asylum application in 2016. The client is a former police officer who fled threats from a violent Central American gang with his then 8-year-old son. The family is incredibly appreciative of Stephanie's years-long support, and she is humbled by Naman Howell's support of this significant pro bono effort. San Antonio partner Jamie Parker lent his appellate expertise to her preparation, Austin associate Rachel Heckelman helped with written briefing, and Austin law clerk Robert Fuqua performed extensive case law research before argument.

Stephanie’s practice focuses on civil litigation and administrative law with a significant portion being devoted to public utilities law. Stephanie has represented utility clients in regulatory proceedings involving hundreds of millions of dollars before the State Office of Administrative Hearings, the Public Utility Commission of Texas, in state district and appellate courts, and in arbitration. She also assists utility clients with Federal Energy Regulatory Commission filings. Stephanie represents non-utility clients in a wide-ranging regulatory and administrative proceedings, assisting businesses and individuals with permits, licensing, and enforcement actions before various Texas state agencies including the Railroad Commission, the Texas Department of Licensing & Regulation, the Texas Real Estate Commission, and others

In addition to her administrative practice, Stephanie represents business clients in state and federal court disputes throughout Texas, both at the trial and appellate lawyers. She also performs pro bono work in divorce and immigration cases as outlined above.

To learn more about Stephanie Potter or the many other skilled attorneys in the firm, please visit the firm’s attorney profiles section.

Since 1917, Naman Howell Smith & Lee has been providing individuals and businesses throughout Texas with the personal attentiveness and expertise they need on their legal matters when they need it most. We pride ourselves on our heritage, vision, and exceptional results. For more information about Naman Howell, please visit namanhowell.com.