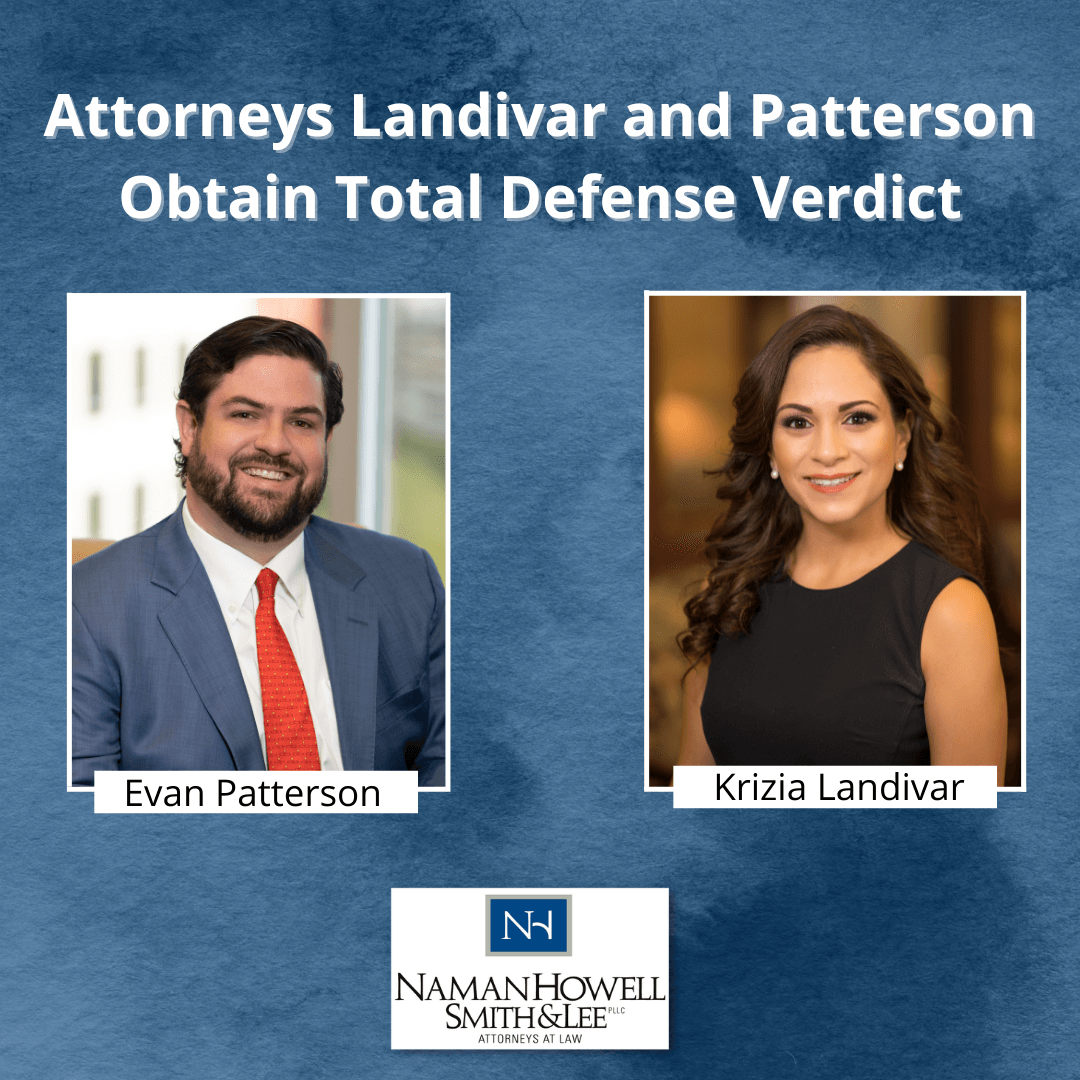 Naman Howell Attorneys Evan Patterson and Krizia Landivar obtained a total defense verdict after a four-day trial in the 131st Judicial District in Bexar County. The Plaintiff in the case alleged that our clients, a cement truck driver, and his employer, acted negligently and caused a three-car accident that allegedly resulted in injury to the Plaintiff whose treatment included a three-level cervical fusion surgery. During the trial our attorneys argued that the Plaintiff had not shown sufficient evidence for the inclusion of the employer on the verdict form; the Judge agreed with the arguments presented by Patterson and Landivar and did not include the employer in the jury questions. In closing, plaintiff’s counsel asked the jury to award over $3 million in damages. After just over an hour of deliberation, the jury returned a unanimous verdict in favor of our clients, putting no fault on our driver and awarding $0 in damages.

Evan Patterson is an associate attorney in the San Antonio Office of Naman Howell. His primary focus is personal injury defense in commercial transportation. Prior to joining Naman Howell, he worked as an Assistant District Attorney at Bexar County District Attorney’s Office. While representing Bexar County, Evan has represented over 25 cases to verdict and is a proud San Antonio native.

Krizia Landivar is a member attorney based in the San Antonio office of Naman Howell. Her expertise is in defense litigation with emphasis in the realm of transportation and tractor/trailer accidents. Krizia represents several national carriers and a host of local, inter and intrastate transportation companies. She has been named a Rising Star by Super Lawyers and is very active in the community of San Antonio. She is a steering committee member of the Latina Leadership Institute, and Alfa International Diversity and Inclusion Committee.

Since 1917, Naman Howell Smith & Lee has been providing individuals and businesses throughout Texas with the personal attentiveness and expertise they need on their legal matters when they need it most. We pride ourselves on our heritage, vision, and exceptional results. For more information about Naman Howell, please visit namanhowell.com.